There was a village with a bunch of rich farmers, and one poor one who didn’t even have a cow, who they called the little farmer. One day, he had his wife’s godfather make a wooden calf in the hope that one day it would grow into a real cow.

The village cows all grazed together, so the next day the farmer gave the wooden calf to the guy who drove the cows to pasture and said the calf was too young to walk and needed to be carried to the pasture. The drover carried it to the pasture where it appeared to eat all day so he figured it could walk back to the village and didn’t carry it back.

The farmer went to the field, but someone had stolen his wooden calf, so he took the drover to the bailiff and got a real cow. But they couldn’t feed it (was there nobody to drive it out to pasture?), so they slaughtered it and salted the meat.

The farmer took the skin to town to sell and buy a new calf (which they wouldn’t be able to feed?), but came across a raven with a broken wing. The weather was bad, so he took shelter at a mill. The miller’s wife gave him some bread and cheese and let him sleep on some straw. Then another man came, and the miller’s wife gave him good food and wine. And then the miller came home, and the wife hid the good food in various places and the man in the linen closet.

So the miller has the farmer join him for more bread and cheese, and he sees the raven wrapped in the cow skin. The farmer says the raven is a fortune teller. Then the raven – through the farmer – tells the miller about all the hidden food. The miller then buys the raven for a lot of money, and the final fortune he gets is that there is a demon in the linen closet so they chased the demon out of the house.

The rich farmers wonder where the little farmer got all his money, so he tells them he sold his cow skin for a ridiculous amount of money. So the other farmers kill all their cows, but then they can’t sell the skins for that amount of money.

They are so upset, they sentence the little farmer to death by putting him in a cask and rolling it into the lake. The priest comes to say mass and the farmer recognizes him as the “demon” chased out of the miller’s linen closet.

Then a shepherd wandered by and the farmer told him that the people wanted to make him bailiff by sitting in a cask. The shepherd says, “I would like to be bailiff,” so he gets into the cask and the farmer drives all the sheep home.

The people then roll the cask into the water. They returned to the village and see the farmer with the sheep and they ask where he got them and he said there were fields and fields of sheep at the bottom of the lake. So all the other farmers jumped in for their sheep and drowned. And the “little” farmer got all their farms.

I “guess” the moral of the story is that if you are quick witted – and willing to basically sentence a random shepherd to death – you can accomplish great things. But I guess it also helps if you live in a village of idiots. Especially ones who can’t tell a wooden calf from a real one.
Posted by Stephen L. Thompson at 10:30 No comments:


A couple years ago, I came up with an idea for a fantasy story with humans, dragons, centaurs, goblins, and two other invented races.  I usually write science fiction, but I do dabble in other genres, and the story was somewhat science fiction because it was about an archeological expedition in this fantasy world.  So I started writing the story, which I eventually titled “Scars of the Blood Fire Valley,” thinking it would be a standalone story.  But as I got to the end of the first draft, I realized that I could very easily continue it.  I still only have some basic ideas, but now this Pathfinder Saga involves twenty-some stories spread out over sixty years.

Having a series can be fun letting you explore different ideas and you can laugh behind your hand as your readers miss subtle hints you’ve dropped that won’t be explained for three or four stories.  Of course, it also means you have to write the damn thing.  “Scars” needs a great deal of revision, which I’m slowly working on, and I’m maybe a sixth of the way through the second story, “What is Found in the Wilderness.” But what can be aggravating – or fun – are all the ideas I have for scenes in later stories.

For example, the main character in the series is this woman named Loma who leads the “Scars” expedition.  The second main character, introduced in “Wilderness,” is a female dragon named Rine.  The two become best of friends and are almost inseparable.  In story … ten, or thereabouts, there is a general who – for reasons – doesn’t like Loma.  He starts spreading rumors about her.  Loma response to these with some quip about his visits to brothels, but Rine has a more direct response.  She takes a talon and pokes it through the general’s chest plate … while he’s wearing it.  She doesn’t hurt him, just shows that she could.  I know it’s a silly little scene, but I can’t wait to write it.  Partly because I think Rine is becoming my favorite character.  When I first designed her, I thought of her as a hippie dragon, but as her character has grown, that is becoming less and less accurate a description.  But that is still an interesting starting point.  She doesn’t show up until the second half of “Wilderness,” but I want to skip the “boring” stuff of the first half to get to her scenes.  What’s going to suck is that at some point in the series, she goes away for a couple of stories to take care of her hatchlings.  When I get to those stories I’m going to miss her.

Anyway, the point of this post is a cool thing that happened with a scene towards the beginning of the third – so far unnamed – story.  At the end of “Wilderness,” Loma goes to spend time with Rine and some other dragons for a … project.  The third story opens with Loma returning to the capital of the human Kingdom.  She meets with family and friends, and then heads to Little Centaur.  In this fantasy world, centaurs are mercenaries who will provide protection for anyone who can pay them.  I don’t know if this ever comes out, but about half of the expense of Loma’s expedition in “Scars” was to employ four centaurs to protect them from bandits and goblins.  In Little Centaur, Loma comes across one of these four, Aureain, who asks if she is looking to hire more centaurs.  She answers that first she needs a guide to this centaur temple, but then she’ll need about fifty centaurs for a mission into Goblin Territory.  Aureain knows that Loma had to work for years to save up enough just to afford four centaurs, so he wonders how she’ll pay for fifty.  And she answers that she has the backing of a dragon.

This scene came out as I was vaguely plotting out the series so I have some clue as to where I’m going.  But as I was running through everything again, I came to this point and I wondered why Aureain would just take her word that she was backed by a dragon.  Yes, this is a world where if you owed a centaur money your life expectancy would be very short, but Aureain would need some proof.  But I don’t see dragons dipping their talon into some ink and writing on a large chunk of parchment “The bearer of this note ….” So I thought, maybe they’d just have these small things of gold with jewels embedded in them with some dragonese script to show this human has their support.  As soon as I thought that, the first thing that came to mind was a dragon credit card.  Yes, it’s a silly idea, but come on, a dragon credit card.  I have to use that now.  Loma shows Aureain this bejeweled gold thing, he takes her to a higher up centaur who can command a group of fifty, and they just send the bill to Rine.  I wish I had a friend like that.
Posted by Stephen L. Thompson at 11:00 No comments: 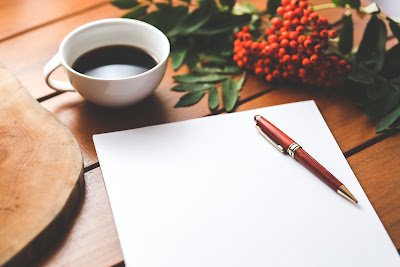 The prompt for today is: zombies

This is what I wrote:

There are several movie reviewers I watch online.  I’ve been rewatching episodes of one lately, and I’m in the Halloween episodes, which is why I’m talking about zombies in February.

I’m not a big zombie fan.  Off hand, I can only think of three zombie movies I’ve seen, and of those the only one I liked was Shaun of the Dead.  Zombies aren’t as interesting as, say, vampires.  Of course, I’m not a big vampire fan either.  I think I’ve written three vampire stories, but one of those was about a guy for whom “vampire” is just the closest term we have for what he really is, and another was about a woman who modified her body with nanites so she could play vampire.  I do have a series of stories I need to work on at some point about “zombies,” but they are just dead bodies who – through nanites – are puppeted by criminals to commit crimes.

Looking back at what I’ve done with vampires and want to do with zombies, I guess I want to use these popular templates, but in my own way.  Which is probably the best way to use them.  I mean, you don’t want to just shamble around like a zombie writing about … zombies.