In a few hours, I'll be starting my 2014 30 Stories in 30 Days Challenge.  In case you can't figure it out, that's where I try to write thirty short - sometimes very short - stories in as many days.  In previous years I have posted the stories on my website or on one of my blogs, but this year I'll be posting them on my Bubblews page.  To get a little more information, check out this post which should answer any questions.

Wish me luck.
Posted by Stephen L. Thompson at 20:13 No comments: 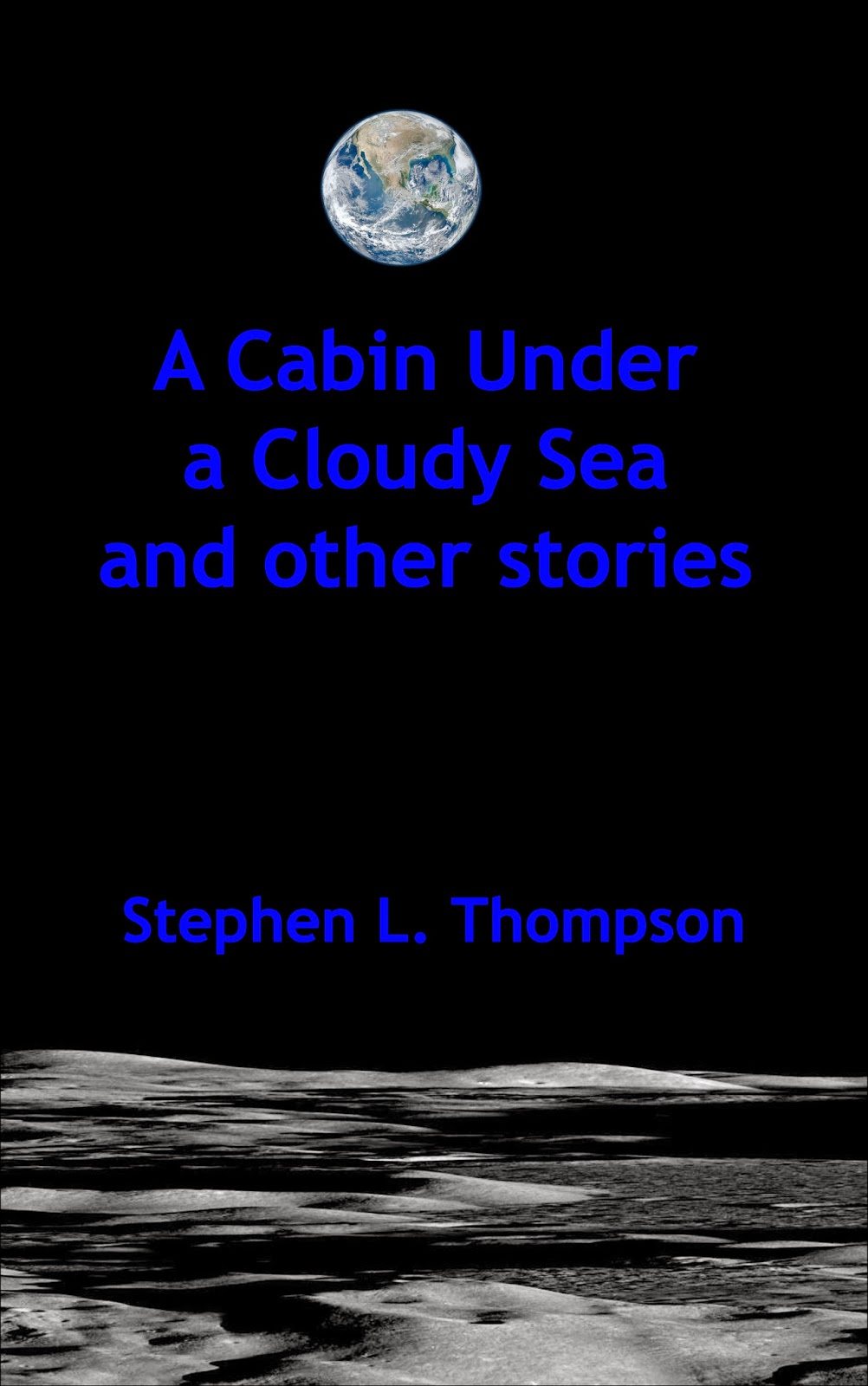 A couple of years ago, I came up with the idea of putting out minianthologies - collections of five to ten stories - on Kindle as a way to use up some of my stories and to let people know I exist.  Well, I have just put out my latest minianthology - "A Cabin Under a Cloudy Sea and other stories." It contains five stories set upon the moon.  The blurb I have for it is as follows:

I hope you'll check it out, and if it strikes your fancy you can download it for only $0.99.  I hope you'll enjoy.

The story behind this minianthology is somewhat long.  Part of the idea behind my minianthologies is to show people a sampling of my writing, but I also like to group similar stories.  When I realized I had several stories set on the moon, it was natural to put them together.  A couple of these were published before - I've revised them for this - but I also wanted a couple new stories.  I had one story that involved time travel, and I haven't figured out how to make it work.  So I would start working on this collection, only to get stuck on this story, set it aside to let my creative juices flow, only to then get caught up in some other project.  It was probably almost two years ago that I started this project, but I didn't really get anywhere with it until about four months ago.

About four months ago was when I learned my story "The Reluctant Host" would appear in Chicken Soup for the Soul: The Dog Did What? which would be published now.  (See my previous blog post.)  You know what would be good, I thought?  If I had a Kindle book come out at the same time to get some of that chicken soup splashover.

Of my dozen or so projects, "A Cabin Under a Cloudy Sea and other stories" was the closest to being finished, so I set out to finish it.  One problem was this time travel story I couldn't make work.  Fortunately, I had recently come up with a new story idea also set upon the moon, "Putting Down Roots." Since I could finish that story, and since the other stories in the collection were more grounded scifi (no warp drive or aliens) the time travel story kind of stood out.  So I swapped the stories and set to work finishing it.

I was making steady progress, when in early July I smacked my forehead because I had missed something.  July 20 marked the 45th anniversary of Apollo 11 landing on the moon.  What better time to put out a collection of stories set on the moon?  I debated for a bit if I should change my publication plans, but I couldn't finish it in time.

As it turns out, this later publication date may actually be better.  One thing am really passionate about is setting up a permanent human presence in space, such as at a moon base.  If I had published this a month ago, it probably would have been lost in all the hoopla for Apollo 11, which I believe all faded into obscurity on July 21st.  But with this ebook coming out a month later, it can help advance my goal of moon bases in my lifetime by showing people the moon isn't just something to get excited about on big anniversaries.

At least, that's what I tell myself to keep from smashing my forehead for missing such an obvious connection.
Posted by Stephen L. Thompson at 12:19 No comments:

The Dog Did What? 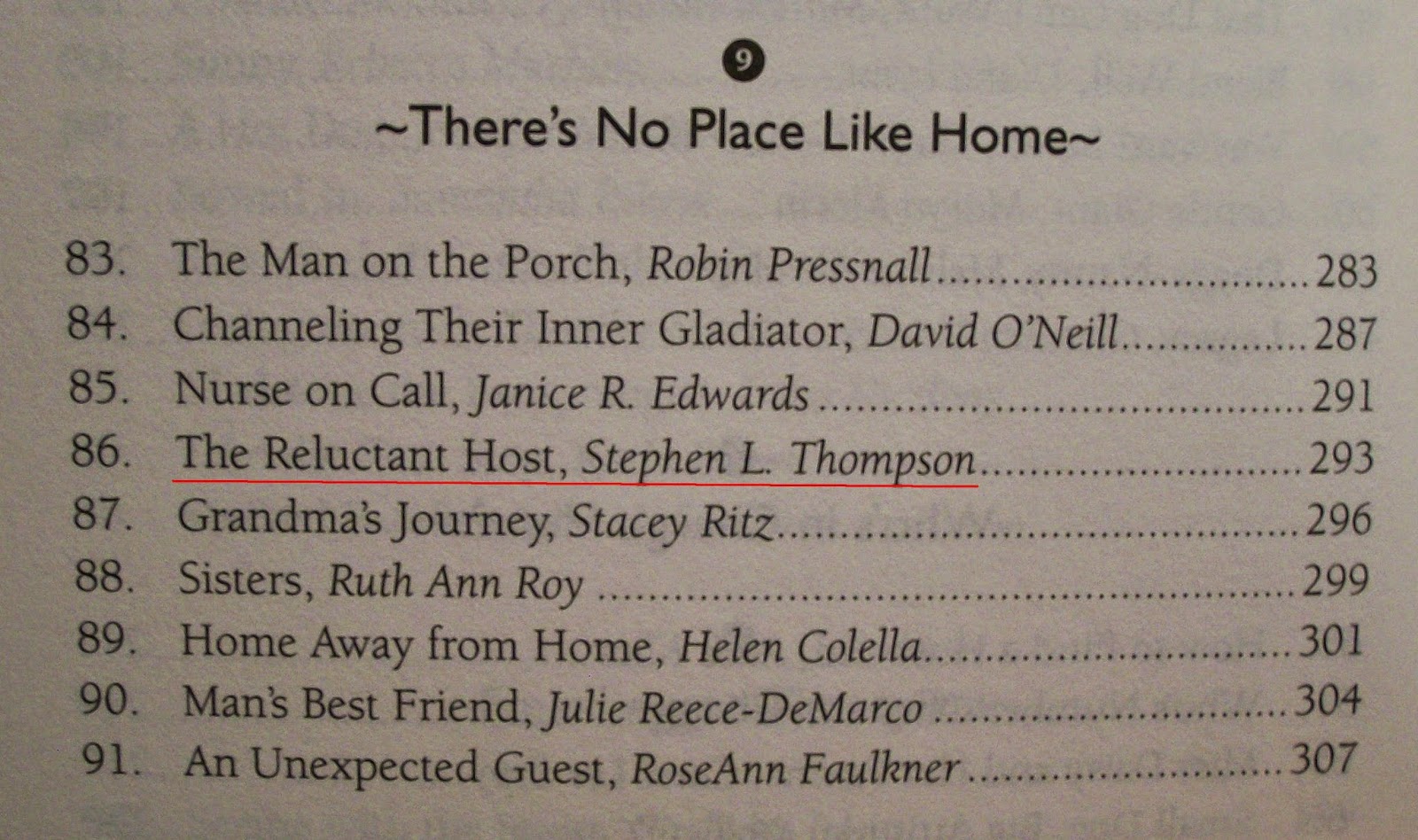 Today's the day.  Chicken Soup for the Soul: The Dog Did What? is out today.  As you can see by the picture above, you can find my story "The Reluctant Host" on page 293.  And while it would be nice if you read mine first, I won't mind if you take your time and read all 101.

I hope you'll check it out, and I hope you enjoy.
Posted by Stephen L. Thompson at 11:48 No comments:

For the last several months, I've been hearing a lot about Patreon.  For those who don't know, Patreon allows people to pledge money to creators.  I first heard about it with webshows who use the money to buy new equipment and stuff like that.  I think that's a great idea and if I had extra money, there are several shows I would support.  But I don't have money, which is why it would be great if I could get some patrons.  But I don't have a webshow or make videos or anything like that.  I write stories.  And I would hate to ask people to pay me to write a story when I give away stories every week for free.  So for a couple of months now I've wanted to get in to Patreon, I just haven't figured out how to go about it.

Well, a couple of weeks ago I had an idea we'll call Plan A.  The plan starts with a poll.  I don't know if you can do polls in Patreon, but I'm sure I could find a poll site somewhere.  The poll would list various scifi things like aliens, alternate dimensions, Andromeda Galaxy, etc., all starting with "A." People would vote on this poll, and then I would write a story (probably in the 1000 word range) dealing with that topic.  And I'd go through the entire alphabet.  I figured if I could write a story every other week, I could be done in a year.  But the thing I would do with those stories is to then revise them and put them out as a Kindle ebook.  My patrons - who pledged at a certain amount - would receive a copy of it, and those who pledged higher would receive a copy of all of my Kindle ebooks.

It's a good idea, but there is one problem with it.  When I first start out, not many people would know about it and only a few people would vote, which kind of defeats the purpose.  To get around that, I came up with Plan B, which is what I'm thinking of actually starting with before going back to Plan A once I have some followers.

Several years ago, I read a collection of stories by various authors with each story set on a different planet.  I thought that was a great idea and that I should do a story for every planet.  So I had the idea, but until now I never really sat down to go about it.  My Patreon Plan B is to write a story for twelve bodies/regions in the solar system: the sun, Mercury, Venus, Earth/moon, Mars, Asteroid Belt, Jupiter, Saturn, Uranus, Neptune, Kuiper Belt, and Oort Cloud.  If I could do a story a month, it would take me a year to go through them all.  And then I'd do the same thing of putting them in a Kindle ebook and giving out copies to those who pledged.

The one sort of issue I still have, is I don't really like the sound of "Give me money, so I don't have to get a job." Because the webshows I watch talk about if they can raise X amount of money they'll get new microphones or a new camera or whatever.  For me it would be, "Help me raise X dollars and I'll ... get a tank of gas?" I couldn't think of a way raising money on Patreon could directly help my writing, only indirectly by me having the time to write and not worry about paying bills.  But then I thought of something.  I've put out several ebooks on Kindle, but one thing I haven't done for any of them is a big promo.  There are sites that will send out tweets about your book to their 100,000 followers ... for a fee.  I haven't felt comfortable enough risking my money on one of these promo deals in the hope it would end up making me more money through sales.  But I think that will be one of my Patreon campaign goals.  If I raise enough money, I'll pay for one of these promo sites to see if it's worth it.  And I'll hopefully pay some of my bills.

Anyway, next month I will be busy with my 30 Stories in 30 Days Challenge, and then I'll probably need a break in the beginning of October, so maybe by November I'll start getting serious with this Patreon stuff.  Watch this space.
Posted by Stephen L. Thompson at 11:00 No comments:

Thoughts on my next ebook cover and blurb

I’m hoping to get an ebook out in a couple of weeks.  Here’s my take on the cover I’ve made and my blurb for it. 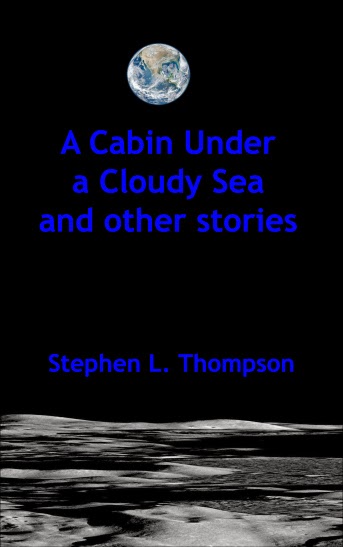 Hopefully in the not too distant future, humans will return to the moon. We will build bases and colonies, create farms and factories, and live and love and learn. “A Cabin Under a Cloudy Sea and other stories” contains six stories set upon the moon and give the tiniest glimpse of the possibilities awaiting us.


Any thoughts?
Posted by Stephen L. Thompson at 18:29 No comments: