Coming up with ideas for stories, writing them out, polishing them up, putting them together in a manuscript, getting a cover, and publishing a book is a lot of hard work.  But that’s only half the battle of writing, because then you have to sell your book.  In many ways, that’s the harder part.  I have several books and ebooks out, and while I send out tweets about them on a regular basis, few people know they exist.  So I’ve decided to take one day each week and really push one of my books.  One aspect of these pushes is to write up blogs about each, which brings us to: 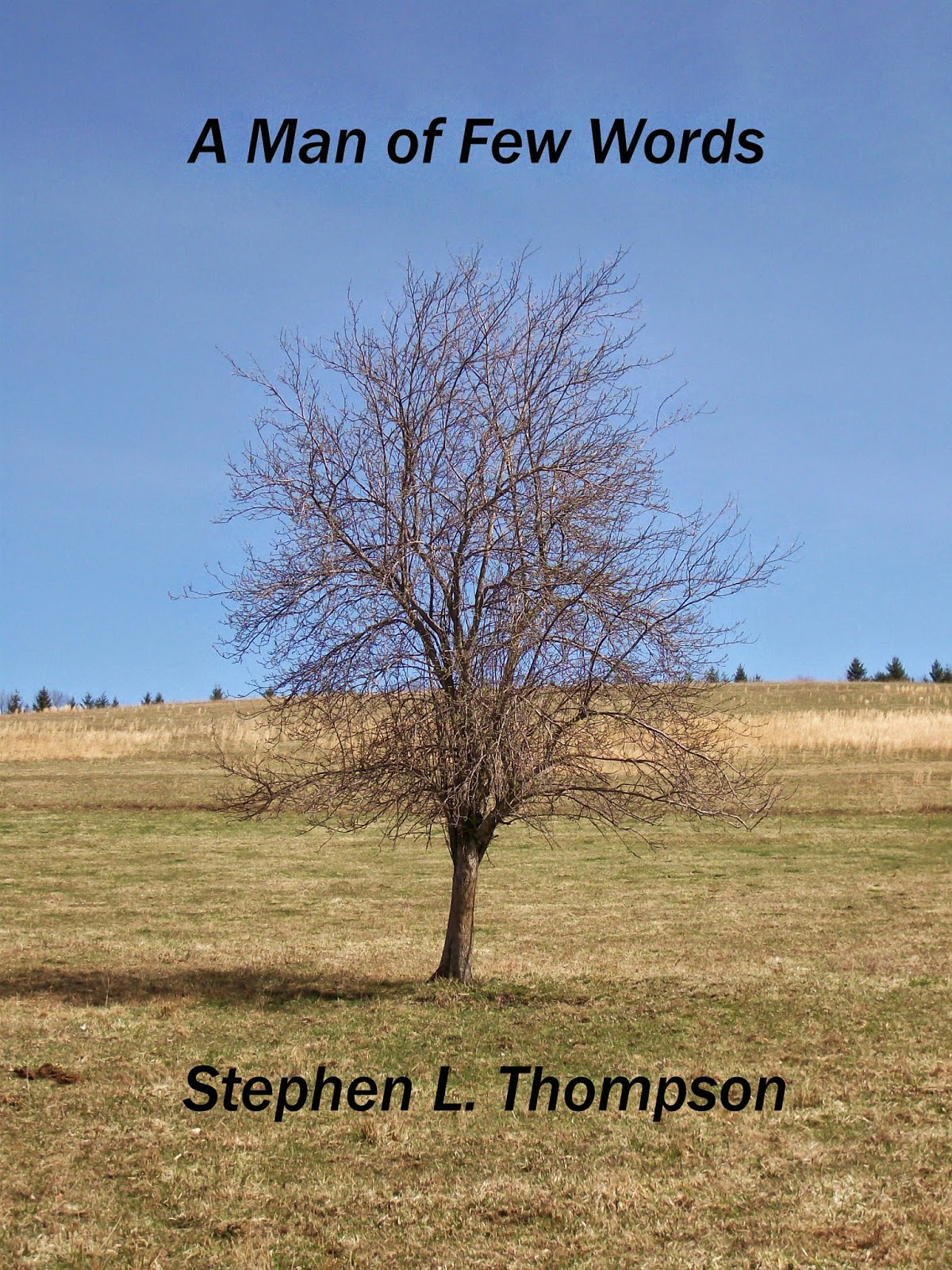 A Man of Few Words is a collection of 50 of my flash fiction stories. How does a teenager work up the courage to call a girl? What would happen if a “T-Rex on steroids” attacked a city? Why do science fiction writers make the best lovers? How does a company get to Second Base with VIPs? These questions and more are explored using less than 1000 words and in various genres from humor to horror and general fiction to science fiction.

The majority of the stories were previously published (most by myself on my website) but all were revised for the collection. In addition, each piece is accompanied by some background information giving a fuller story experience.

For an example, here is one of the stories you’ll find within.

Anne moved her chair next to her husband Gregory. From her purse she took a thick paperback, bought just over a week before. Putting on her glasses, she studied the glossy cover and read the blurb on the back. Shaking her head, she said, “I never did see why you read these sorts of novels.” She opened to the receipt used as a bookmark and said, “You only had forty-some pages left.”

Without knowing anything about the characters or plot, she began reading the end of the story to her husband as he lay silently in his best suit.

If you are at all curious, then check out the page for A Man of Few Words on my website to find out where you can find it.
Posted by Stephen L. Thompson at 08:39 No comments:

I first posted this story years ago on my MySpace page (remember those?) I recently revised it and posted it on Post Any Articles, but it was deleted when there was a shake up there.  So now I'm posting it here.


Padawan Tencoer stumbled into the Emergency Room of the Jedi Hospital.  Stopping at the nurse’s station he gasped, “You have to help me.”

The nurse, an older woman with a hairdo the size and shape of an Zeqwinly ant colony, did not even look up from her magazine, “Which limb was cut off?”

The nurse took a deep breath, expelled it slowly out of her nose, and pausing after each word asked again, “Which limb was cut off?”

A cough brought Tencoer’s attention to the two padawans and Master Jimpoo sitting in the little waiting room on his left.  One of the padawans was missing his left leg below the knee, and the other was missing her left hand.  Master Jimpoo had lost both of his arms from below the elbow, and was Forcing a pen to fill out the insurance paperwork.

Tencoer looked back at the nurse and said, “Ah, none.”

She turned a page, “Then why are you here?”

“I’m sick.  I think I got food poisoning from the goulash in the cafeteria.”

The nurse finally looked up.  “What?” She stood and looked over the counter, checking to see that he did have all of his limbs.  She then hit a button on her desk.  Klaxons sounded throughout the building, and in a few seconds a doctor and orderly were standing by the nurse.

The doctor, still holding his putter, asked, “Nurse Stalch, what is the meaning of this?”

She shut off the alarm and pointing at Tencoer, “This padawan is sick, possibly food poisoning.”

“From the goulash,” Tencoer added.

The doctor set his putter on the nurse’s station and turned to the orderly, “Don’t just stand there man, get a wheelchair.”

When the orderly returned shortly with the wheelchair, he, the doctor, and Stalch helped Tencoer into it.  As the orderly started pushing Tencoer towards the Emergency Room, the doctor turned to Stalch and said, “Watch my putter,” then followed his patient.

Stalch sat back down and found her place in her magazine.  Seconds later Master Jimpoo stood before her.  He read her name tag and said, “Nurse Stalch I must protest.  These Padawans,” he pointed at the two in the waiting room with the stump of his left arm, “and I have been waiting for over an hour, while that Padawan,” he pointed after Tencoer with the stump of his right arm, “was rushed right in.”

As she turned a page she replied, “He was sick.”

Jimpoo held up his stumps, “This isn’t a case of the sniffles.”

Slamming her magazine down, Nurse Stalch stood and glared at the Jedi Master.  “Master Jimpoo, you should know that almost half of the Jedi budget is spent on artificial limbs.  Perhaps if you and those padawans would suffer for a while, you would be more careful with your lightsabers in the future.” With a “So there” nod she sat back down and picked up her magazine.

Jimpoo glanced at the padawans, then pointed his right stump at Nurse Stalch’s forehead.  Moving his stump ever so slightly, he said, “The doctor will see us now.”

Looking up from her magazine Nurse Stalch replied in a soft monotone, “The doctor will see you…” switching to her normal tone she continued, “…when he is ready to see you and not a moment sooner, and if you try that again you’ll be missing all your limbs.” She turned her chair away from Jimpoo and went back to her magazine.

Jimpoo returned to his seat with a frown.  He looked back and forth between the padawans and the nurse.  Finally, addressing the padawan only missing a hand, he said, “Padawan Vanan.”

“Go to the cafeteria.  See if they still have any of the goulash.”
Posted by Stephen L. Thompson at 11:21 No comments: