The nuts were falling, so a cock and hen went up to the mountains to eat them before the squirrels hid them all. When evening came, they either had eaten so many nuts, or they were just lazy, they didn’t want to walk back home. So the cock built a carriage out of nut shells. The hen got in, but the cock wasn’t about to pull it for her.

Along came a duck who yelled at them for coming to her mountain. She attacked the cock, but he fought back and she begged for mercy. So they harnessed her to the carriage and set off home. Along the way, they picked up a pin and needle.

It grew dark before they reached home, so they stopped at an inn. The landlord didn’t want to let them stay, but they promised the egg the hen had laid that day as well as the duck.

Very early the next morning, the cock woke the hen. They put a hole in her egg and ate it all, then set the shell on the hearth. They set the sleeping needle in the landlord’s chair, and put the pin in his towel. They then flew home. The duck heard them, and she found a stream and left.

When the landlord woke up, he washed his face, but when he dried off the pin scraped his face. When he tried to light his pipe, the eggshell flew in his eyes … somehow. And when he sat down, the needle poked into him. He was so angry, but he couldn’t find the cock, hen, or duck, and swore off helping vagabonds.

So because the cock beat up the duck, that means he can just give her away when it suits him?

Living on a farm with chickens, I know that chickens will sometimes eat their own eggs. But in a world of talking chickens, isn’t that more cannibalism than you’d normally find in a children’s story?

If they could fly, then why did they walk to the mountain? After writing that, I went back and saw that in the story it just said they went to the mountain, it didn’t specify what mode of transport they used. But why didn’t they rest a bit, then fly home? Also, ducks can fly, so why did she have to swim away?

So after making a deal for payment to spend the night, the cock decided to, what, stiff the landlord and just be a dick? Why stick the pin and needle to prick the landlord? Had he been too hard on them? Was that a scene that was cut for time, or something?
Posted by Stephen L. Thompson at 11:00 No comments: 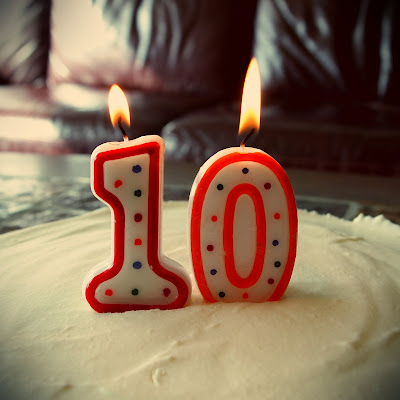 Actually, my website may be a little older, but it was on September 19, 2006 that I added a visitor counter.  Since then there have been over 16,000 visits, or almost four-and-a-half visits a day.  Which is a lot more visits than my first website got.  I was in college in the mid 90’s, and one of my professors was big on this new internet thing.  I don’t believe it was actually part of a class, but he showed us how to make webpages with Netscape, I believe.  If we wanted, he would have helped us get it online, but I never took him up on it.  That first webpage of mine – which I just carried around on 3.5 disk – was just a list of movies and TV shows I liked, with images from The Terminator, Babylon 5, and such.  I had links to things, but I’m not sure what they were.

After college, especially once there were more interesting places on the internet, I made a new webpage which I again just carried around on 3.5 disk since most of my internet use at the time was from visiting the library.  This one was just a list of links I’d use instead of having to remember all the addresses.  Some were to my email, but others were to various websites I liked to visit on a regular basis.  For example, I’m pretty sure one was to Astronomy Picture of the Day.  Of course, I still have a box of 3.5 disks and I’d wager that one of them had my portable website on it.  I’d check, but I no longer have a computer that reads 3.5 disks.

Anyway, once I started getting serious about my writing, I decided I should probably have a website to act as a central source for info about my writing.  And that’s basically what my current, on the internet website is.  If you check it out, you’ll find links to my books, as well as links to all of my stories that are online, many of which are on my website itself.

I’m not really sure what else to say, but here’s to the next ten years.

Posted by Stephen L. Thompson at 13:00 No comments:

A cock and a hen wanted to go visit a Mr. Korbes. So the cock built a little carriage pulled by four mice. Along the way they met a cat who asked to go with them. They agreed and the cat got in the carriage.

Later, they came across in turn, a mill stone, an egg, a duck, a pin, and a needle, who all got in the carriage to go to Mr. Korbes. But Mr. Korbes was not at home.

So the mice took the carriage into his barn, the cock and hen perched on a beam, the cat sat by the fire, the duck settle in some water in the sink (apparently), the egg wrapped up in a towel, the pin stuck itself in a chair cushion, the needle got in bed with the pillows, and the mill stone laid by the door.

When Mr. Korbes returned, he went to build up the fire but the cat – for some reason – threw ashes in his eyes. He went into the kitchen and the duck splashed water on his face. When he tried to dry his face with the towel, the egg broke. He tried to sit down, and the pin stuck him. He jumped into bed, and hit the needle. And when he finally tried to run out of the house, the mill stone killed him.

The last line in the story is “What a bad man Mr. Korbes must have been!”

I have some questions about this “story.” I could almost see this as almost a bunch of little pranks they pulled on him, right up until they killed him. Did all of these things have some reason to wish Mr. Korbes ill, or is this a “bad things happen to bad people” type of story, and since so many bad things happened to Mr. Korbes, there must have been a reason.

Or am I missing something? Would the people from hundreds of years ago have recognized the cat as referring to … the French, or something?
Posted by Stephen L. Thompson at 11:00 No comments: