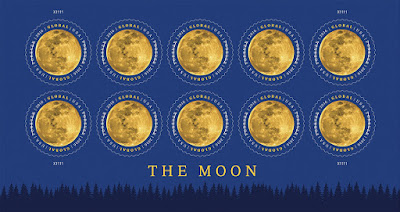 TMRO (pronounced “tomorrow”) is a, usually weekly webcast for all things space.  One of the topics they covered in their Episode 9.01, were planetary stamps put out by the United States Post Office.  They also have Moon stamps.  One host pointed out that they looked like coins (see image above) and said, “Wouldn’t it be cool to have Moon coins?” I made a note of “Moon coins” because it seemed like an interesting idea.  After some thought, it led to the story below.

Katerina put down her Scroll and looked over at her granddaughter Monika, standing in front of the closet with the contents of Katerina’s personal effects storage locker piled around her.  What had the girl’s attention was a thin, black plastic case she was holding.

Monika brought it over and Katerina opened it to show a golden disk bigger than the child’s palm.  She showed the image on the front to Monika and asked, “Do you know what this is?”

The girl shook her head.

Katerina almost said something about the state of education on the ship, but had to admit that outside of literary references, there was little reason for the youngest generation to learn about this.  “It’s the Moon,” she said.  “Earth’s Moon.  It’s tidally locked and only shows one face towards Earth.”

Holding it out to Monika, Katerina said, “Run your finger over it.” As the girl did so, Katerina explained, “The rough areas are mountains, while the smooth are plains.  Ancient astronomers named them seas before knowing that water couldn’t exist on the Moon’s surface.”

Lifting the commemorative coin out of the case, Katerina turned it over and said, “And this is the side that couldn’t be seen from Earth.  We had to build spacecraft to see it.”

“Why does it look different?” Monika asked.

“Ah, it’s because of how it formed and how it became tidally locked.  If you really want to know, you can ask the ship’s computer.”

Monika ran her finger over the Far Side for a moment, then asked, “Where did you get it?”

“This was made from gold mined on the Moon.  A cheap trinket for tourists.”

The girl frowned.  “Why did you bring it?”

Katerina smiled and placed the coin back in the case.  “That’s a long story.  But it was just a small memento.  Like your grandfather’s fossils.  Why don’t you go see if he’ll dig them out for you?”

Once Monika left the room, Katerina looked at the coin and smiled.  She had picked it up at the Tycho Resort when she and Ivan were on their honeymoon.  Running her finger over Tycho’s location on the coin she remembered their joy at the time.  She thought about rewatching the videos from then, but figured she should wait until after Monika had left and she and Ivan were alone.

With a laugh she shut the case.  Would her personal videos eventually end up in the Museum of Earth, along with all the fossils, tree leaves, and other knickknacks the First Generation was taking to a new star system?  Setting the case on the table, Katerina went back to her Scroll, knowing that at least one piece of the Moon would end up in that museum.

One of the projects I’m working on is an ebook similar to “A Cabin Under a Cloudy Sea and other stories” which contained five short stories set on the Moon.  I also included a bonus story, which involved the Moon but wasn’t set there.  I figured I would do the same for this new collection, and “Memento” will be that story.  Which is very fitting given that “TravelsBeyond Imagination” will also be included in the collection, and may even be the title for it.
Posted by Stephen L. Thompson at 12:30