There was a show I watched where I was debating giving up on it, but then it was cancelled, so problem solved.  It did end on a bit of a cliff hanger, so on one hand that sucked, but on the other hand the show wasn’t that great.  My main issue with the show was it was poorly written.  Probably the biggest issue I had was how they had several opportunities to explain things, but instead would give out little dribs and drabs.

Instead of the main character learning more than they wanted to know, coming to grips with it, and then going on to solve the rest of the mystery, the new person gave them some crumbs which lead to a shocking reveal.  And then the following week they’d give out another crumb which lead to another shocking reveal.  The next week, another crumb and another shocking reveal.  And all the while there was a super basic question the main character never asked; for a real person in this situation it would probably have been their first question.  I don’t know if the scene was cut for time, or what, but its lack left me somewhat dumbfounded.

Now, there are a few ways this could have been done better.  Maybe the new person only knew 30% so most of the mystery is still unknown, maybe they only have ten minutes and can’t tell the full story, or maybe they could have written more interesting characters so “How will X react to this shocking reveal?” doesn’t need to be used every week to get people to come back.

If you hold too much information back, you audience may get bored because nothing seems to be happening.  But if you flood them with information right at the start, they can get overwhelmed and give up.  So you need to find a compromise.  This, usually, is just giving as much information as is needed right now.  How else do you do you multiple seasons of a show?  But, if there isn’t some in-universe reason for the dribs and drabs of information, your audience may notice the manipulation and not be surprised, or care, if your show is cancelled.

I’m a bit of a procrastinator, especially when it comes to writing.  Like, I’ve been thinking about writing this blog for a couple weeks, at least.  It’s gotten kind of bad over the last few years, so I’ve been trying to get around it.  One thing I’ve tried is a To Do list, which has and hasn’t worked.

The Version I To Do list is something I’ve done for years, which is where I basically make a list of all the things I need to do, usually broken up between writing stuff and everything else.  The problem with this is that you end up with a sheet with like fifty items on it which becomes extremely disheartening because you feel like you have to do it all by tomorrow.  And when I don’t get it all done, it feels like it’s just hanging there above my desk mocking me.

For the Version II list, I tried to solve the problem of too much stuff by scheduling only a few things each day.  I have a part time job where I, usually, only work Saturdays and Sundays.  So I started making a list of things to do on each of my five days off.  Mondays I’m a little tired from work, so I usually only had simple things like water the houseplants, make sure all my bills are paid, stuff like that.  And then for Tuesday I’d schedule myself to finish some blogs and work on a story, and so on.  But what seemed to happen a lot is that I’d spend Mondays doing the simple stuff and then relaxing by binge watching some show on Netflix.  I’d go to bed planning to spend all of Tuesday writing, only to wake up with a toothache which made me not feel like doing anything but binge watching Netflix.  And then I’d spend Wednesday trying to catch up only to throw off the whole thing and wonder why even bother.

In theory, Version III of my To Do list fixes the problems of the earlier versions.  I basically now have three lists: long term, shorter term, and this week.  Long term is for projects I really should do, but there isn’t much pressure to do them soon.  This ranges from novels I want to write to garden plans I thought of in the middle of winter.  Shorter term is for things that have more of a deadline, like blog posts or getting my taxes done.  These are usually written on little legal pads, while the “this week” list is on scrap paper.  It’s for the simple tasks like watering the houseplants, as well as the shorter term items I want to get done.  I still have fifty some items on my To Do list, but I only really see the ten or so items I can, or need, to get done this week.

It is not a perfect system, but it does feel like I’m slowly getting more stuff done.  Most weeks.  There are times where I’ll put “The Week Of X” at the top of the list, but by the end of the week I’ve only crossed a few things off, so I’ll just change the date instead of rewriting the same list.

Email ThisBlogThis!Share to TwitterShare to FacebookShare to Pinterest
Labels: writing

With everything going on in the world, I figured I should try to make things a little brighter.  But I couldn’t really think of anything, so instead I’ll just have a sale for some of my ebooks.  The following three ebooks will be free from Monday May 2nd, through Friday May 6th, so get them while you can. 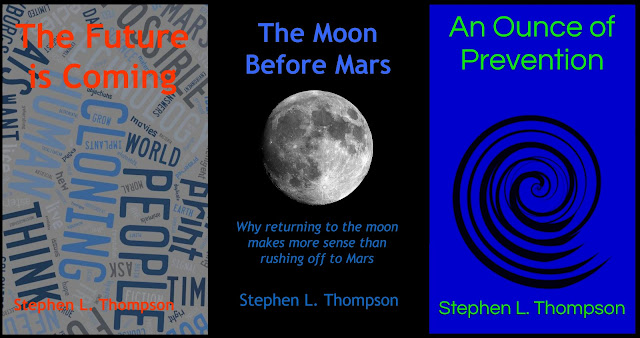 Fortunately, there are other places in the solar system besides Mars. While bases on the moon and amongst the asteroids won’t be as “inspirational” as one on Mars, they will have opportunities for businesses to make goods and services as well as profits, meaning less chance of them being outright cancelled. This will make life better on Earth and secure a firm foothold in space for humanity. The essays in The Moon Before Mars: Why returning to the moon makes more sense than rushing off to Mars allow me to describe my ideas on what can be accomplished on the moon and with the asteroids, and why Mars isn’t the destiny of humanity its cheerleaders make it out to be.

Like most people, Jason Fisher wanted to make the world a better place, but he doubted he would ever have the chance to make much of a mark. Then a “woman” came to him, asking his help to save humanity by threatening it.
Posted by Stephen L. Thompson at 14:30 No comments: