As a science fiction writer, I’ve spent a lot of time thinking about how technology will change the way we live. I came up with these ten short essays about science fictional elements that will – almost certainly – one day become science fact as a way for people to start coming to terms with them. Since I’ve spent time thinking about clones and AIs, I feel I’ll be okay when they do finally show up whereas most people will probably freak out. The point of these essays is to get people to start thinking about the future because, no matter what we do, the future is coming.

Here’s one of the essays, which was firstpublished as a blog post.

Someday – almost certainly sooner than anyone suspects – a human will be cloned.  There will be protests, boycotts, marches, condemnations, congressional hearings, etc., all for this one minor event.  I say minor event, and here is why.

The short term issues
The biggest problem human clones will face comes from people watching too many bad science fiction movies.  In those movies, 99.9% of what they show of cloning is utter crap.  In reality, clones will not be mindless automatons who will blindly follow the orders of some megalomaniac out for galactic domination.  Nor will you run the risk of walking into an alley where someone will jump you, and ten minutes later a clone will walk out of the alley to steal your identity.  And clones will not “remember” the lives of their donors and do … whatever.  A clone will just be another human.  That’s it.  If they can escape the mental scaring caused by “parents” or guardians bent on making them into exact duplicates of the people who donated some DNA, they will be no more screwed up than the rest of us.

Cloning will – especially at first – be extremely expensive.  That combined with the fact that we already have over seven billion humans made the old fashion way begs the question, what need is there to create clones?  Seriously, what will be the point?  Yes, grieving families will want to replace loved ones, and companies will take their money to give them a clone who will have the same DNA as the person they lost.  But the clone – because they will have lived a different life – will not be the same person.  And yes, some historical figures will be cloned as well as the best and brightest of various fields, but when the Einstein clone takes up poetry instead of physics, what will be the point of continuing?

There will be clones, but they will make up a miniscule fraction of the population.  But a ton of legal and ethical questions will surround them.  Will the donor of the DNA have all the rights and responsibilities of a parent?  What recompense will people have if they are cloned against their wishes?  Will the donor be able to abort the clone, and if so, how far into the cloning process will they be able to do that?  If the donor is Canadian but the cloning is done in the United States, will the clone be Canadian, American, or have dual citizenship?  Will a clone be able to become President?  It’s probably a safe bet that few – if any – of these questions will be answered by the time human clones walk among us.

The long term issues
Above, I said that the fictional instaclones that are ready in a few minutes or hours you often see in movies is utter crap.  In the short term, that is entirely true.  The technology to rapidly copy a person may be possible, but probably not for several decades at best.  As such, the day may come where you could walk into an alley and ten minutes later a clone walks out to steal your identity.  That could happen, but since cloning won’t be the only technology to advance, I’d think it would be far easier for the bad guys to steal your identity by hacking into your computer implants and turning you into a puppet.  That will be easier then going through the process of taking a genetic sample, growing the instaclone, and then somehow giving it enough of your memories for it to pass as you.

About the only possible reason I can think of for large scale clone production, will be for people to download themselves into younger bodies.  There are two ways I can see this happening.  The first is a brain transplant.  Now, if the clone has to grow up so the brain will fit, that will only work if the clone can be grown without a brain.  But if you could make brainless, instaclones, then that may be a viable option.  The second way is some sort of electronic transfer.  You make a digital copy of yourself, then install it in a clone with an undeveloped brain.  Of course, if you can upload your consciousness into some electronic format, then why not keep it as that in either a virtual world or by downloading it into a mechanical body?  As I said, cloning won’t be the only technology that advances.

Basically, at some point in the not too distant future, a human will be cloned.  A great deal of time will be spent demonizing that fact, but in the long run human cloning will almost certainly just be a fad.

If you’re curious, you can find “TheFuture is Coming” on Kindle.
Posted by Stephen L. Thompson at 09:30 No comments:


For those who don’t know, QuarterReads is a site where readers can buy short stories for only a quarter.  What’s great for the authors of these stories is that $0.22 goes to the author.  Usually, it seems like for other sites the pay ratio is the opposite of that.  In addition, if you really enjoyed a story, you can tip the author $0.25, $0.50, or $1.00.  If you are interested in reading great short stories – and helping out their authors – I highly recommend you checking out QuarterReads.  This may be a bit biased, but here are six stories I suggest you take a look at.  :D

“No Longer Number One”

Offers one possibility of what it will be like after the aliens arrive.

“It’s Harder Than It Looks”

A ghostly little story about writing.

How can a Presidential assassination be bigger news when it fails?

What’s the worst thing that can happen after learning you’ll be President some day?

What happens when politicians decide to use time travel?

A scifi author’s worst nightmare; when the alien invasion they write about, comes true.
Posted by Stephen L. Thompson at 09:00 No comments: 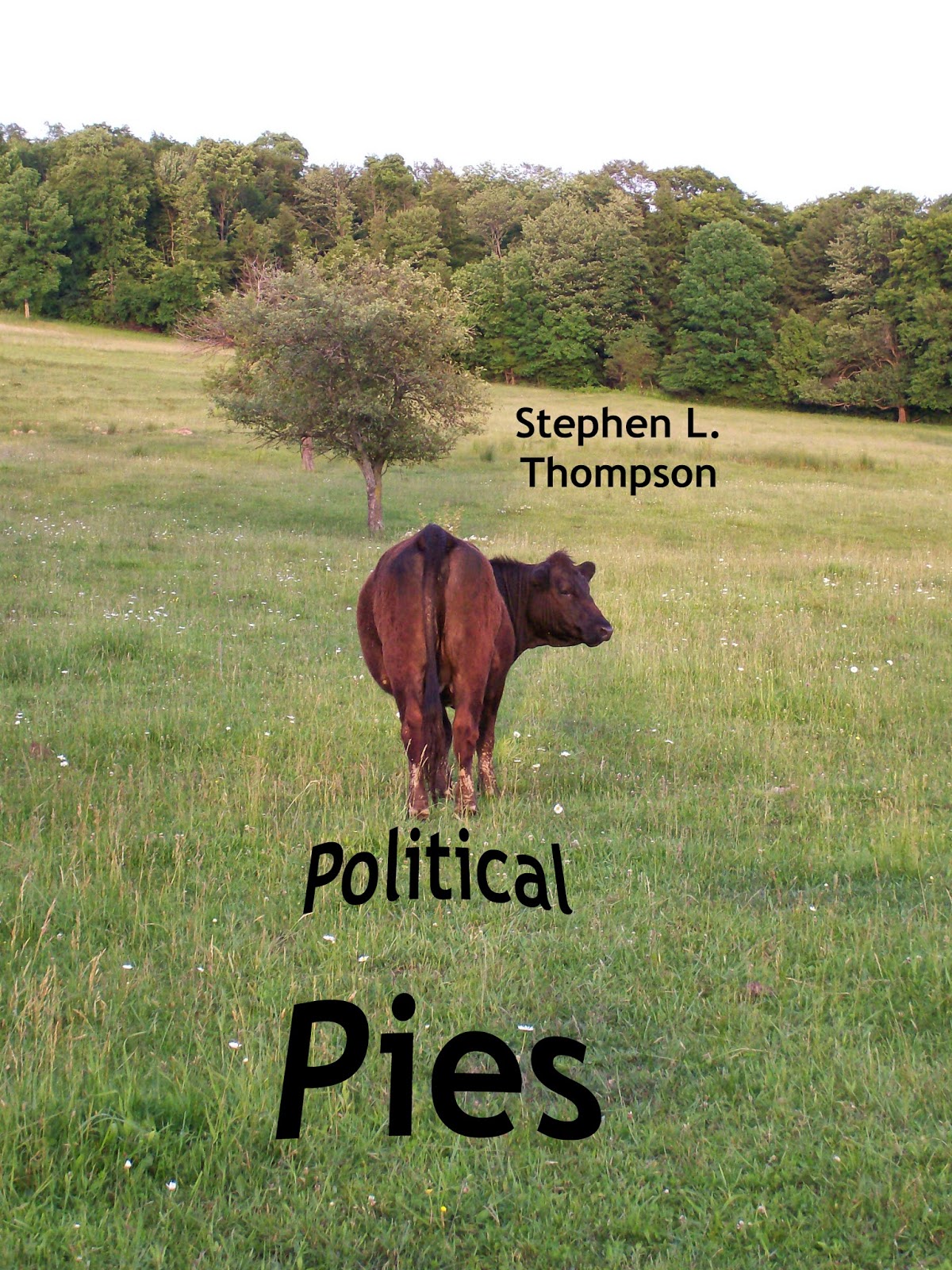 Everybody complains about politics, but does anyone do anything about it? My attempt to do something about it was to collect forty of my short stories with a political element into my Political Pies anthology. The stories are either politically neutral or equally condemning of the national parties. Instead of trying to sway you to one ideology or another, my goal is to just get people thinking about politics in the hopes a rose might grow out of all the political manure.

Here is an example of such a hopeful rose.

A middle-aged gentleman walked up to the microphone at the front of the auditorium. He cleared his throat, then said, “Senator, on the campaign trail you have often stated that the rich and powerful – both individual and corporate – should receive tax breaks because they are the job creators.”

The man took a piece of paper out of his pocket and unfolded it. “Sir, I’ve been unemployed for twenty months now.” He held the piece of paper up so everyone could see it was a check. “This is the last of my life savings.” He tossed the check up onto the stage about ten feet from the candidate. “I give it to you so that you – as the nearest I’ll get to the rich and powerful – now have all of the money that matters to me. Now give me a goddamn job!”

If you are at all curious, then check out the page for Political Pies on my website to find out where you can find it.
Posted by Stephen L. Thompson at 10:00 No comments: