Several years ago, I got the idea of challenging myself to write thirty stories in as many days.  Since then, I’ve picked a thirty day month each year to try this.  Some years, I’ve succeeded and others I haven’t due to moving, illness, etc.  Tomorrow, I will be starting my 2015 30 Stories in 30 Days Challenge.  I will be posting the stories on my Persona Paper profile, but if you want a more detailed explanation of how this all started, as well as links to all my old stories, you can find them on this page on my website.

Two notes, this will almost certainly be the last year I try this.  Also, it’s pretty much a given that I won’t get to thirty stories: I’ll be happy if I get ten.  The reason being I think the story ideas I’m coming up with now require a longer story to develop and aren’t the two or three hundred word stories I could just hammer out in an afternoon.  We’ll just have to see if I can come up with a new challenge for my writing.
Posted by Stephen L. Thompson at 10:58 No comments:


I’m a member of the Brookville Writer’s Group and we have just published the third volume of our Writer’s Stew. 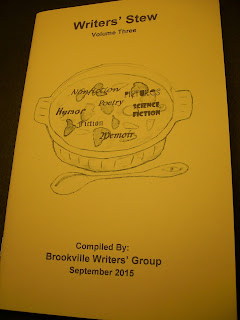 This is a collection of artwork, poetry, and stories by the members.  It’s available – as long as supplies last – for a donation to the Rebecca M. ArthursMemorial Library in Brookville, PA.  You can see the posts I made for Volume One, and Volume Two.  But since it’s unlikely few of the people reading this have even heard of Brookville let alone live within driving distance of it, here is my short, scifi story you would find within the pages of Volume Three.

With a quick shuffle, Sofia hurried into the classroom.  “Good morning class,” she said.

Sofia smiled at her students and set a small box on the table at the front of the class.  In a semi-circle before the table were the five desks of her “present” students: five year old Alex, seven year old twins Sumitra and Meira, nine year old Joachim, and twelve year old Luna.  On both ends of the semi-circle were tripods holding screens showing the smiling faces of her “remote” students, six year old Fiona and ten year old Tobi.

“We’re doing something a little different this morning.  Do any of you know Mister Polonski in hydroponics?”

Joachim raised his hand and said, “He works with my dad.”

Sofia smiled.  “I thought you might know him.  Well, he and I were talking last night, and he told me about this souvenir from his childhood he brought with him when he immigrated.  And I thought it would be fun to see what you make of it.  So gather around.”

As her present students went to the table, Sofia took out her assistant and tapped in a command.  “Fiona and Tobi,” she said, “I’ve just sent you photos of the object.”

Before opening the box, Sofia stated, “You can look, but don’t touch.” She then took off the lid revealing the flint Sioux arrowhead Jon had found as a kid on his grandparent’s farm in South Dakota.  Sofia let them look for a moment, then asked, “Does anyone know what this is?”

Luna raised her hand, but before she could say anything, Sofia said, “Don’t say anything, just yet.” With a smile, she told the rest of the class, “I want all of you to take a few minutes to come up with what you think this is and who used it.  And Luna, I’ll be asking how you know about these.” Stifling a yawn, since she and Jon had done a lot more than just talk the night before, Sofia stepped away as the students began discussing amongst themselves.

Jon told her the arrowhead had just been a fun trinket growing up.  He only brought it with him because, while it did remind him of his grandparents, it didn’t weigh that much.  And people were only allowed a few kilos for personal possessions when moving to the moon.  Sofia had struggled for weeks until settling on a hardback copy of her father’s first novel and her teddy bear.

Jon swore he’d been on the moon for a week or more before realizing that – unless someone else had a similar memento – his arrowhead was the oldest thing made by humans on the moon.  After he said that, Sofia had come up with today’s lesson, which was for her class to consider what that long forgotten arrowhead maker would think about where it had gone.

Given that this story is set on the moon, I would be remiss if I didn’t mention my Kindle ebook “A Cabin Under a Cloudy Sea and other stories” which is a collection of five, short stories set upon the moon.  I’m in the process of putting together a second collection of moon stories, and a revised version of “Travels Beyond Imagination” will be included in it, possibly even as the title story.  Maybe in a year I’ll have more on this.
Posted by Stephen L. Thompson at 10:01 1 comment: